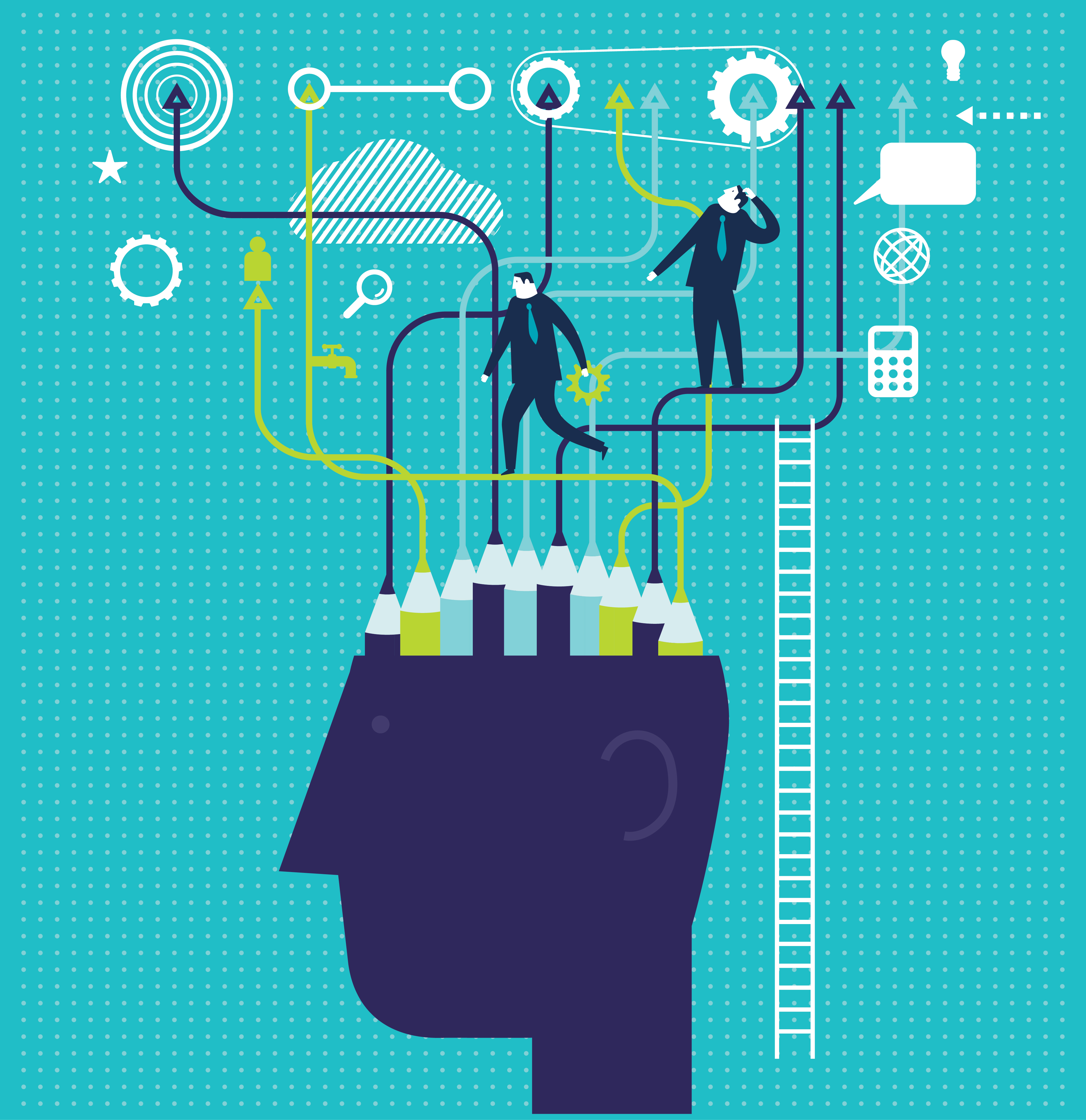 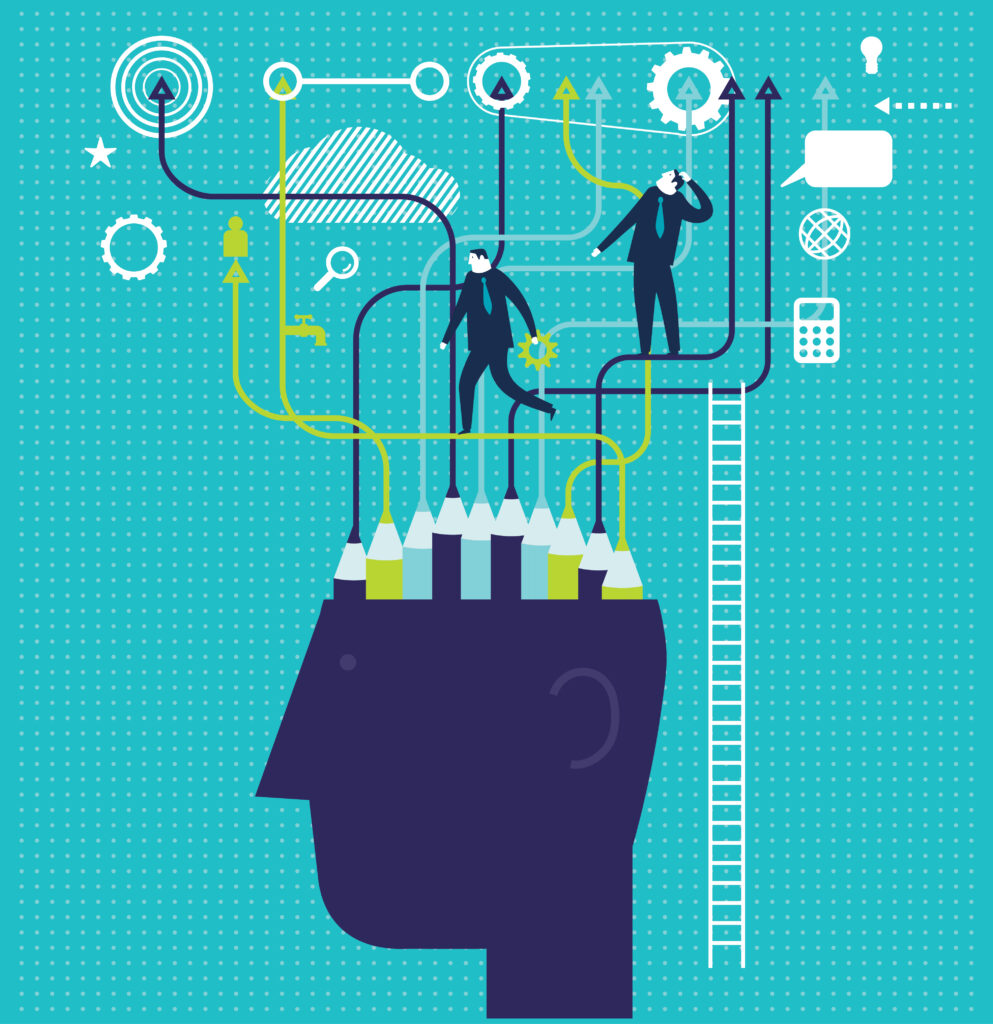 Many people think “you can’t teach an old dog new tricks,” but not Daniel Goleman and Daniel Siegel. They understand the brain science, which shows we can all grow new pathways in our brain that support our emotional intelligence and Mindsight. That science explains the mechanism of neuroplasticity – lasting change to the brain. During the Brainpower webcast series, Dr. Goleman and Dr. Siegel describe concrete ways leaders can grow their own brains AND help their employees build their capacity for emotional intelligence and Mindsight.

How to Develop a Connected Brain

A key to emotional intelligence and Mindsight is having a connected brain, where different parts of the brain communicate well with each other. How do you make a more connected brain?

“Here are the steps to making a more connected brain. You grow new connections between neurons with synaptogenesis and synapse modulation. You grow new neurons, at least in the hippocampus. Myelinogenesis is the creation of myelin. Myelin when it’s laid down, allows the action potential. This means that the ions flowing in and out go 100 times faster and the resting period, the refracting period between firings, is 30 times shorter. So 30 times 100 is 3,000. So with myelin, you’re 3,000 times faster and more coordinated and balanced.

So, how do you build myelin? Dan’s insightful book, Focus, talks about the key: focus of attention. The way I think about it is this: Where attention goes, neurofiring flows, and neuro connection grows. Where attention goes – how I use my mind to focus attention – gets neurons to fire and where neurons fire, they grow and rewire. I use the acronym SNAGS: Stimulate Neural Activation and Growth. One of the main things to SNAG a brain is the focus of attention. But the context in which that happens, trust, actually helps you promote more growth. There’s a social engagement system that’s turned on when you get trust going. As a leader, that’s the way you can help promote neuroplasticity. Learning and unlearning and deep practice in skill building – this is all stuff that builds myelin.”

CEO of the Mind and the Mind’s Radar

Dr. Goleman responded to Dr. Siegel’s comments focusing in on two parts of the brain that play an active role in emotional intelligence. Dr. Goleman said,

“I want to hone in on the prefrontal area of the brain. This is the part of the brain that’s really the brain’s executive, the CEO of the mind. It focuses attention, can help us integrate, plan, make decision, process information, strategize, learn, pursue goals. The prefrontal area should be the boss of the brain and is in our best moments. The amygdala, however, is at the bottom of a kind of spiral of emotional centers in the brain. The amygdala is the radar for threat in the brain; it’s the trigger for strong negative emotional responses. When the amygdala looks around, it’s asking: am I safe? Is there a threat? And if the amygdala thinks there is a threat, it can take over the prefrontal cortex in what I call an amygdala hijack and in the hijack, several things are going on.”

Three Signs of an Amygdala Hijack

Dr. Goleman explained, “First of all, there are three signs of a hijack. One is that you have a really strong emotional reaction. It might be anger, or fear, or going numb. It’s something that doesn’t help in the situation. The second is that it’s very sudden. It kind of takes you over. You’re surprised by it. Third is that it leads you to do something that doesn’t work, that’s inappropriate.”

What Happens During an Amygdala Hijack

Dr. Goleman continued, “In a leader, an amygdala hijack is never helpful. The mind state during a hijack, as shown by the research of Joseph LeDoux at New York University, tends to be very childish. The logic of the amygdala is that of a child, that of poetry, art, myth. Anything is possible. It’s a very fuzzy logic. It’s not the logic of the prefrontal cortex.

Attention also fixates on the threat. That was great in evolution because we needed to see what was rustling in the bushes. But, today the amygdala responds to complex social realities, symbolic realities. Feelings such as ”˜I’m not being treated fairly’ can cascade in the body a whole flood of reactions. Also, memory reshuffles so what is salient to what we think the perceived threat is, is what we most easily remember. This leads us to rely on over-learned response. During an amygdala hijack, our responses are rigid. We do what comes to us most easily, which is what we’ve practiced the most. It might be something very immature such as ”˜I’d like to hit this guy.’”

Dr. Goleman offered tips on how to manage a hijack.

“There are many ways to manage a hijack, but here’s one approach. First, pause whenever you sense it’s coming on or are in the midst of it. You may not realize because it can happen so suddenly. We need to collect ourselves, pause. Mindfulness is very helpful here. Dan also mentioned something in another webcast that’s really helpful here. ”˜Name it to tame it.’ If you can say, ”˜Oh, I’m having that reaction,’ you already are doing something neutrally with your mind. You are deactivating the amygdala and energizing the prefrontal cortex. It shifts the ratio of power.

A third thing you can do is calm down. Focus on your breath. Or, if it’s possible, take a break. John Gottman at University of Washington, who studies marital arguments, which are really mutual emotional hijacks, recommends that a couple take 20 minutes out. He says it takes about that long to calm down from the hijack. Then you can come back and talk things over.

The fourth step is repeat as needed. This takes advantage of the neuroplasticity that Dan is talking about. What we’re trying to do is develop a new way of reacting to those triggers.”

How to Help Others Build Their Brainpower

Dr. Siegel described concrete ways to help others build their brains. He said,

“These are ways as a leader you can help promote neuroplasticity. You can have relationships that build trust. You can create a culture with a lot of strength and integrity and intention that encourages the people working in your organization to get good sleep. Sleep is the greatest thing for neuroplasticity. We’re now beginning to understand that sleep helps clean away the toxins that are inevitably produced during the waking state. So, people who are sleep deprived are accumulating toxins. They don’t pay attention as well, they can’t remember as much, they’re irritable. The brain does not consolidate learning when it is sleep deprived. Nutrition. People need to be eating well. Aerobic exercise, keeping active, humor. Some studies suggest that humor actually helps promote brain growth. Novelty, having new things go on and the close paying of attention. All of these things help promote building a connected brain.”

“At drdansiegel.com, we’ve had a lot of people download a simple practice called ”˜The Wheel of Awareness.’ It takes about 25 minutes. The results have been absolutely fascinating. I’ve collected and recorded responses from over 10,000 people who I’ve given this to in person. You can actually integrate consciousness to promote self-monitoring and self-modulation. That is, you can modulate your internal state through this very simple practice. What you’re doing basically is distinguishing the knowing from the known of consciousness and in doing that, you’re giving a huge amount of power for choice and change. This is exactly what we as leaders want to do is to provide the people we work with the opportunity to actually create more integration in their life.”

Brainpower: Mindsight and Emotional Intelligence in Leadership is a collection of four streaming videos with Daniel Goleman and Daniel Siegel. This series provides leaders, executive coaches, management consultants, and HR professionals with a science basis for their leadership development work. The video content is a recording of Dr. Goleman and Dr. Siegel’s live webcast series broadcast in February 2016.