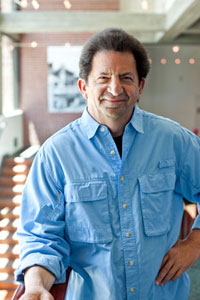 Wes “Scoop” Nisker is an author, radio commentator, Buddhist meditation teacher, and performer. He is the founder and co-editor of the international Buddhist journal, Inquiring Mind. This journal has been a donation-supported, semiannual journal dedicate to the creative transmission of Buddhadharma to the West. He has studied Buddhist meditation for over three decades throughout Asia and America, and leads his own retreats and workshops on Buddhist insight meditation/philosophy internationally.

For nearly 40 years, he has worked in radio as a news anchor and a commentator. He has won awards in FM programming from Billboard Magazine, Columbia School of Journalism, and the San Francisco Media Alliance. Most recently, he has been performing his monologue to critical acclaim all over America under the DVD title, Crazy Wisdom Saves the World Again! and the CD title, The Big Bang, the Buddha, and the Baby Boom.